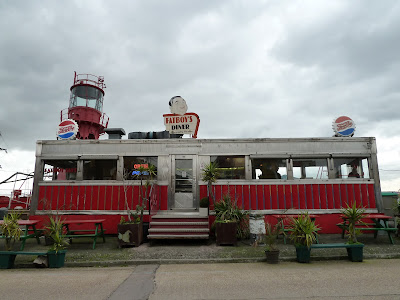 Trinity Buoy Wharf, 64 Orchard Place, E14 0JW
tel: +44 (0)207 987 4334
God bless America. Land of the free, home of the brave and birthplace of the diner. Greasy burgers, thick milkshakes and fried onion rings - what's not to love? It's no wonder the concept has travelled. In this case - all the way to the banks of the Thames in London's Docklands. Fatboy's Diner is a bit of a slog to get to (our route took us on the DLR to East India Quay then via an urban bird sanctuary) but worth it for the sheer kitsch. The mobile trailer was built in New Jersey in 1941 and has been featured in the film Sliding Doors and various shoots for Vogue. Inside a faded certificate hangs crookedly on the wall. It reads: "Voted London's Best Restaurant." 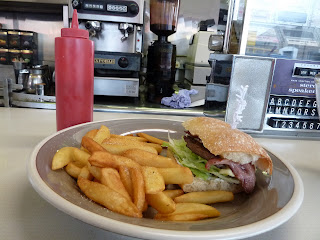 Forgive me, but I find it very hard to believe that Fat Boy's Diner was EVER voted the Best Restaurant in London. Most Unique, yes. Best Decor, sure. Quirkiest Restaurant, maybe. But food-wise, it just doesn't cut the mustard. The best thing about Fat Boy's is the milkshakes. There's chocolate, strawberry, vanilla and banana - all for £2.45. They are thick, creamy and huge - served in a giant metal cup. 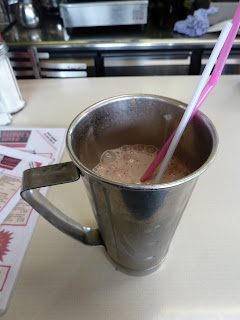 Fat Boy's scores points too for creativity in naming menu items.  Mustard = yellow paint. Lettuce = rabbit food. Fried onions = brown bad breath. I went for a Plus Two which encompassed a "giant Fatburger topped with crispy Canadian bacon and choice of Swiss or American cheese" for £3.95 and a side order of chips. The chips were sprinkled with seasoning salt, which I liked. The burger on the other hand...not so good. The patty tasted like it came straight from a box. It was overcooked and rubbery. Even the nice slice of Canadian bacon couldn't save it from being downright gross. 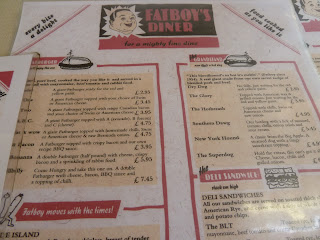 The good thing about Fat Boy's is that everything is dirt cheap. Two of us ate burgers, chips, onion rings (tasty) and drank shakes for under 20 quid. I wouldn't rush back for the food, but the atmosphere is pretty darn cool. After lunch, we went for a little wander in Trinity Buoy Wharf and discovered London's only lighthouse, a community of artists living in brightly painted shipping containers, a sculpture of a man holding a severed head and this sofa...sitting in the middle of a carpark with a nice view of the Millennium Dome. Random. But then again, so is a 1940s American diner, plopped in east London. 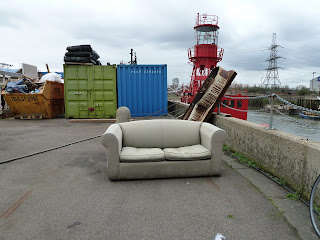