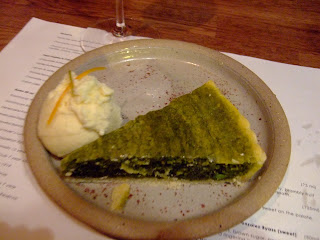 One reviewer dubbed it, "the best tortilla this side of Spain." Another called it "Camberwell's first destination eatery." I would add: "The most enormous tapas you'll ever eat." Angels & Gypsies is attached to the very chic, boutique Latin-themed Church Street Hotel. If you're walking down Camberwell Church Street you won't be able to miss it. It's the only trendy-looking joint amongst a sea of Chicken King, KFC and dodgy shops selling cheap mobile phone SIM cards. Inside, you get a warm welcome from a gaggle of waiters: one of whom takes your coat, another who pours your water, and one more who asks what you'd like to drink before you've even laid eyes on the wine list. It's sweet, but you kind of get the feeling that Angels & Gypsies is still trying to find its wings. The mega-keen vibe doesn't stop at the staff. The menu offers an incredible choice of 43 plates of tapas. It was a bit overwhelming. My dashing dining companion remarked, "Good lord! There's almost too much choice." 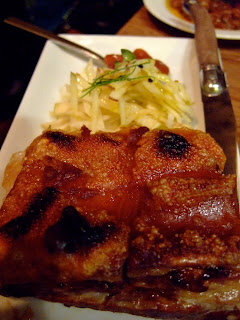 After much humming and hawing, we decided on five plates: king gambas with a piquillo pepper vinaigrette; slow roast pork belly with rum plum jam and cox apple salad (pictured above); lavender and rosemary rubbed lamb cutlets a la plancha with roasted garlic aioli; slow cooked aubergine and coriander stew and the classic tortilla. All were delicious. All were humungous. Herewith lies the great conundrum of Angels & Gypsies: you feel lucky to be getting so much bang for your buck; but you are too stuffed to try more than five plates. Ahem, that said, we managed to make room for desserts. All in the name of research, peoples. I chose the pistachio and almond tart with vanilla pod ice cream (pictured at the very top). Holy demons it was rich. It was divine, but three words: Way. Too. Much. 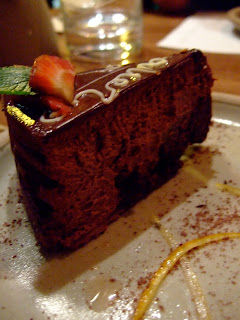 My lovely companion opted for the above: chocolate mousse cake with a hint of honey and cinnamon. If it had been a dessert competition, hers would have won. But again, it was so rich, and so huge that her forkfuls started approaching slow-motion, halfway through. Saving the best for last, what Angels & Gypsies gets five stars for is the wine. We chose a £16 bottle of rioja which went perfectly with everything on our plates. With desert, I died and went to heaven with a glass of 2006 Castana Monastrell Dulce dessert wine, while on the other side of the table, hums of pleasure were made with a 30-year-old sweet sherry. The most hilarious moment of the evening came when we asked the waiter to send over a glass of dessert wine to a friend who was having a romantic birthday dinner with her husband on the other side of the restaurant. We were horrified when the waiter mistakenly put the glass down in front of the wrong couple and nodded in our direction. The young lady gave us a blushing smile of confusion, while her boyfriend got the wrong idea and gave us an over-enthusiastic thumbs up. When we told the waiter that he had delivered to the wrong table, he too was horrified, albeit very sweet and he sprinted back to the bar, re-poured and re-delivered to the correct address. It was very funny. Back out in the cacophony of cars and sirens of Camberwell Church Street, we agreed that maybe Angels & Gypsies had a clever tactic: give people too much choice and huge portions, so they'll want to come back and try what they couldn't fit in the first time. A devilish plot, that just might work.
Posted by snoopermodel at 02:28