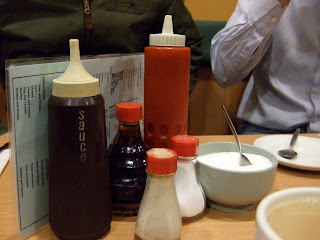 
"Let's go for breakfast," says my editor. This is not a phrase I hear often. I work on a morning radio programme that gets put together in a mere three hours. It's usually so rushed it feels a bit like someone's holding a gun to your head, shouting, "MAKE RADIO! NOW!". But on this particular day, most of the programme was being presented and put together in Baghdad. So we had some slack. We decided to celebrate by going for a team breakfast and trekked across the street from the BBC studios in Bush House. It was 7am, and like zombies, we stumbled sleepily into Wright's Bar. I admit, I groaned when I saw where we were going. It's a dive. Right across from the London School of Economics, it attracts students whose mummies and daddies have not sponsored their full education. It is for those on student loans and struggling to make ends meet in one of the most expensive cities in the world. It is for journalists who have a whole 15 minutes to spare for breakfast. 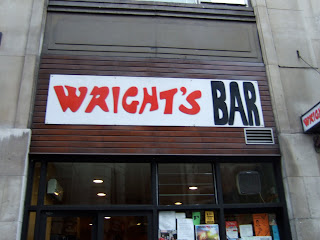 We were surprised at such an early hour to find other people inside. Two workmen in bright yellow vests were hunched over two gigantic plates of french fries with gravy. Breakfast of champions. There aren't many tables in Wright's. Those that do exist are stuffed in the very back of the cafe, near the storage closet. We plopped ourselves into five seats. A nice old man came over with a pad of paper to take our orders. I was feeling flush and went for the most expensive thing on the menu. 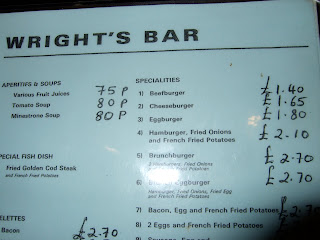 A ham and cheese omelette with a side of fried tomatoes was £2.70. And that's why people come here. It's cheap. Dirt cheap. One of my colleagues had a bowl of minestrone soup (at 7am - weird, right?) and that put him back a whole 80p. As much as I would like to pull the food snob card here, this place is actually decent. The omelette was a generous size and whatever cheese they used inside was tasty. The ham did not look like SPAM. The tomatoes were burnt to shit, but when I last looked at the stickers on the door, I didn't see a Michelin star. 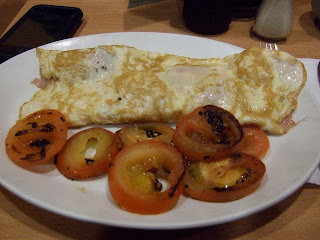 Granted, if you ate here everyday, you would end up like Morgan Spurlock in that Mc-movie and start having heart palpitations. I'm not sure anything on the menu is good for you. Likely nothing is organic. But hey, it's cheerful - and cheap as chips.
Posted by snoopermodel at 10:12