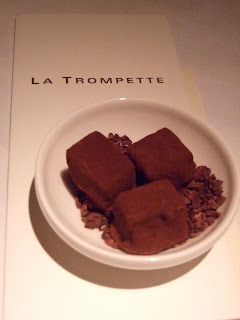 5-7 Devonshire Road, Chiswick, W4 2EU
tel: +44 (0)208 747 1836
Being a local Chiswickian, I had heard good things about La Trompette. People would often ask me, "ooh, you live in Chiswick, have you been to La Trompette?" But the answer was always no. The rave reviews were enticing, but the look of the place was not. Don't get me wrong - it sits on one of the prettiest streets in Chiswick, alongside quaint boutiques and antique shops. But whenever I pressed my nose to the window, I always saw a rather cold-looking hotel lobby atmosphere. Nearly always, the patrons were overwhelmingly men in suits. It looked far too stuffy for a young punk like me, wearing jeans and trainers. Second, it had a Michelin star, which I concluded, meant that it had a crazy-expensive price tag. Oh, how I love being wrong. It was with great delight, which I found out that La Trompette offers a 3-course dinner for £19.95 if you order before 7.30pm. Bargain-tastic. 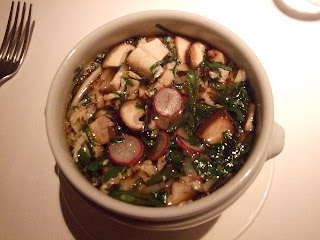 The thing that I liked immediately about La Trompette, is that it IS stuffy. At first. But then you call them on it - and it's all a brilliant ruse in the name of professionalism. My dinner companion for the evening was a sassy brunette who is doing her masters in history and other intelligent things at a Westminster University. As the waiter sat us at our table, she cooed, "oooh, I love these wine glasses. I may have to put one in my handbag." He raised an eyebrow, and retorted by sticking two fingers to his eyes and pointing one back at her, very evil-movie-villain-style. Decoded: I'll be watching you devil-girl. He liked us. Both of us decided to go with the £19.95 menu and splash out on bellini cocktails to start. We had three choices for each course, and I decided on a Thai-inspired broth to start (above). This confused me a bit, because the joint describes itself as being "predominantly French with roots in the South and Southwest". But nevermind. The soup was divine and went extraordinarily well with a glass of chilled Viognier, recommended by the super sweet sommelier Matthieu Longuere. 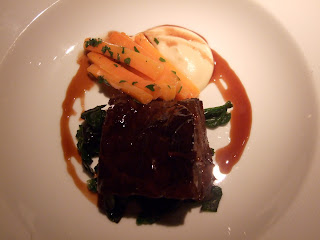 The main course was the show-stealer. Pour moi: daube of beef with parsnip puree, curly kale and buttered carrots. Again, I was surprised when I ordered and the waiter didn't ask how I would like my beef cooked. But jeez, when you're Michelin-starred, you know how to cook meat, right? And so, out came perfection. The beef was rich and sticky (with a touch of honey, I guessed) and the parsnip puree was truly a luxury to die for. 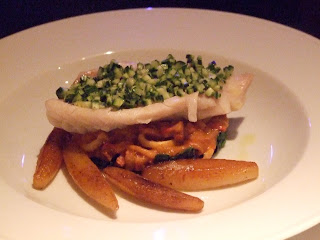 For my kleptomaniac companion, it was a filet of sea bream with chorizo, courgettes and roasted potatoes. Heavenly. And I know it sounds clichéd, but the French really know how to get their portion sizes right. They were satisfying enough that we made orgasmic sounds throughout our meal, but not so big that we left feeling that we would have to get a lorry to cart us out of there. Another thing we loved: we had a different waiter for each task. The movie-style-I'm-watching-you-guy would deliver us with new cutlery throughout the meal. The sommelier came after every course and offered us new ideas for wines to match. A nice lady cleared our plates. Another gave us bread. The only fella we missed out on was the cheese dude - the fella in charge of cheese. But that's because we ordered this for dessert: 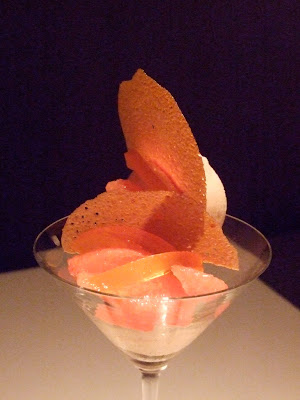 Hello beautiful. This is a pink grapefruit sorbet. Handmade with love and candied peel shavings. Le sigh. We had one last glass of vino for the road and as we thanked each of our hundreds of waiters profusely, we were handed our coats and bags by movie-star-villain-guy. He paused before handing my companion's bag back and did a quick search for cutlery, or wine glasses. "You're clear," he said deadpan. "We'll be back," we shot back, Schwatzenager-style. And we will.
Posted by snoopermodel at 11:07