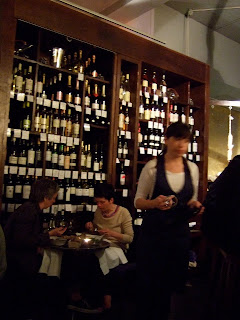 61-63 Charterhouse Street, EC1M 6HJ
tel: +44 (0)20 7608 0851
"Is your restaurant at all connected with Terroirs?" I asked our waiter after taking a bite of my beef onglet with bordelaise sauce. The reason for my question: the buttery sauce rich with shallots and red wine gave me flashbacks to my favourite dish at Terroirs - the beef bavette. It was meant to be a compliment, but the waiter shot back with: "no, most certainly not and we were here first anyway - waaaaaaay before Terroirs." He said it with such disdain that he gifted me with a thin layer of spit on my arm. Splendid. I prodded him a little further: "it sounds like you don't like Terroirs very much." "No, I like the food very much," he replied, "but let's face it, they are the competition." Hence the title for this post. Comptoir Gascon has a feeling of short man's syndrome about it. The arm-spitter was my first clue to a wee bit of an inferiority complex. Also, Comptoir is the little brother to Club Gascon - the swanky French eatery down the road - renowned for having some of the best foie gras this side of France. Comptoir Gascon is the bistro offshoot. More informal, less expensive. How can you not help but feel a little jealous? 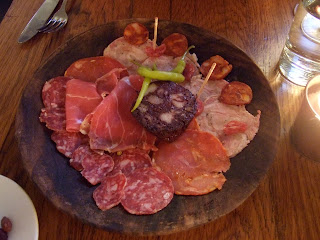 Now, it's not to say the food at Comptoir Gascon isn't good. It is. But not quite as good as other French restaurants in London such as Terroirs in Charing Cross and Le Poule Au Pot in Chelsea. The menu at Comptoir Gascon is split into three sections: mer, vegetal and terre. Instead of starters, they have "humble beginnings." So we humbly began with the piggy treats (pictured above) which was a selection of cured ham, sausages and a chunk of black pudding (£7). Not normally a huge fan of black pudding, I had a reluctant taste and was genuinely surprised. It had a nice hint of shallots and wasn't as crumbly or rich as the black puddings at Scottish B&B's that I normally shove straight to the side of my plate. The piggy plate went down a treat with a beautiful red from Cahors. I went on to have the onglet of beef (£13.50), which was very good, but came out fairly lukewarm, which was disappointing. I also ordered a side of homemade french fries, cooked in goose fat which I had heard rave reviews about. Sadly, they too came out lukewarm. They were also far too salty and, frankly, pretty uninspiring. My fella on the other hand couldn't stop raving about his choice from the mer category: sauteed baby squid, barleysotto and piquillos (£12.50). 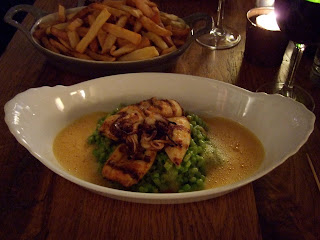 Barleysotto, you ask? We did. Our waiter explained it as being a risotto - made with barley instead of rice. Healthy as that might sound, it's made with extraordinary amounts of cream and parmesan, which probably explains why H was making gratuitous humming sounds as he devoured it. The squid was ultra fresh and the piquillos were a nice partner. We were almost too full for anything more, but the chalkboard listing the desserts proved too tempting. Because we were celebrating six years of living in London, it seemed only right to order the "chocolate London surprise" (£6). 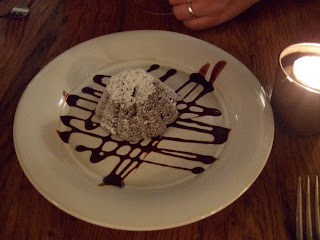 It was a surprise all right. I was expecting to dig my fork in and have chocolate come oozing out, but the sponge was dry and dismal. I'm afraid to say, it didn't have a leg to stand on. And  when you're suffering from short man's syndrome, you need all the extra leg you can get.
Posted by snoopermodel at 06:37