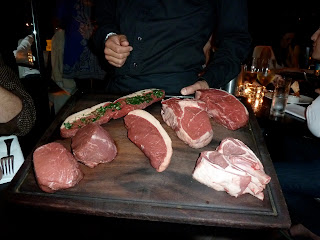 The Towpath, Richmond Riverside, TW10 6UJ
tel: +44 (0)20 8948 4030
I love steak. I could happily eat it every night of the week. I know it's wrong. I've read Michael Pollan's excellent book the Omnivore's Dilemma. And, just this week, Friends of the Earth released a report urging people to limit their meat intake to three meals a week. Cutting down, the group said, could save 45,000 lives a year. That is hard for me to accept because I really, really like meat. My favourite meal of all time is a succulent rare piece of barbecued tenderloin. In fact, a couple weeks ago, when my husband asked me what I wanted for my birthday, I replied: "steak". 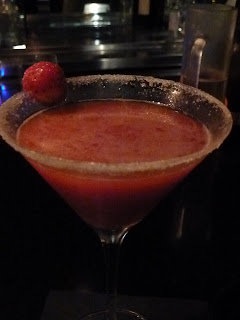 So, this is how we ended up at Gaucho, on the banks of the Thames in Richmond. The chain has 12 restaurants in London and boasts the best Argentinean beef in the city. This branch is relatively new and has a prime spot right on the river. With it's white leather seats, low lighting and clubby music, it feels a bit more like Ibiza. Along with tasty meat, Gaucho also prides itself on cocktails. Rightly so. Gaucho's drink list is impressive. Their specialty is mojitos, but as we bellied up to the bar the enthusiastic young bartender sung praises about the Carino: a mix of bison grass Polish vodka, strawberries and passionfruit with a sugared rim (£8.50). Very Sex and the City and extremely moorish. Mr Buckingham Palate couldn't bring himself to go for something so feminine, so ordered the Gaucho Bloody Mary (£8.25). He loved it. Spicy with a good hint of horseradish. Very manly. As we sipped, we perused the wine list and were blown away by the choice. Gaucho has hundreds of bottles from all over Argentina. It's intimidating, but we were quickly approached by a man in black with a smooth Spanish accent who introduced himself as "the wine guy". He patiently explained the different grapes of Argentina, where they were grown and picked us out a lovely, rich and slightly spicy red tannat from the Salta region called 'Don David' (£29.95). 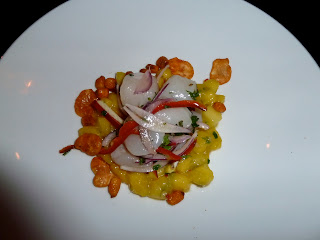 Knowing that we were going to devour wicked weights of meat for our main course, we both chose a fish starter. Me: the Argentine baby scallop ceviche with mango salsa, red onion, coriander and lime (£12.75). Him: hand-picked crab with quail's egg, avocado, red onion and mustard mayo (£9.95). The ceviche was beautifully fresh and the soft texture of the scallops made me chew each bite slowly to savour the gentle flavours. The mango salsa was a winning accompaniment, not too sweet. I was a little baffled however by a random sprinkling of spicy, toasted broad beans because they were the same snacks I'd had while sitting at the bar. It was odd that they were then tossed over my starter. Anyhoo... 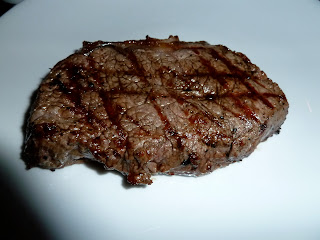 The main act arrived. Our lovely Peruvian waiter had come over earlier with an impressive selection of raw steaks and explained each cut of meat. "Meet the meat," he smiled. Each cut comes in three different weights: 225g, 300g or 400g. Knowing I had to save room for birthday cake, I went for 225g of sirloin (£16.75). As you can see, it comes naked. I wish I had kept it that way, because the meat itself tasted wild, rare and fresh. Instead, I rather ruined it by dumping a drab, goopy peppercorn sauce (£2.25) over top. It was disappointing. Mr Buckingham Palate had better luck with a 300g medium rare chunk of ribeye (£19.50) with mushroom sauce. His topping was buttery and earthy and complimented the meat. Overall, both steaks were cooked well and tasted good - but we both agreed that we'd had better. 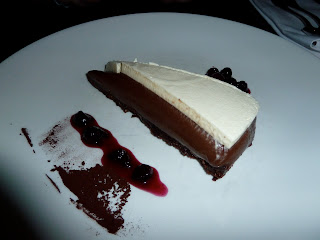 Just like a cow has four stomachs, I found an extra one for the double set chocolate cake with blueberry sauce (£7.25). It was a creamy white and milk chocolate number with a creamy mousse-like texture. It was a little too rich to follow such a heavy meal, but quite lovely. I'm not convinced that Gaucho has the best steaks in London, but the service is good, the food above average and the cocktails and wine great. If it was a drinking den, I'd be a regular. But as for a new favourite steak joint, my hunt continues.
Posted by snoopermodel at 04:18